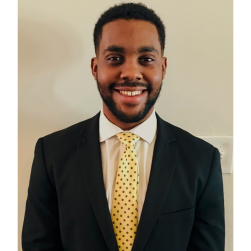 He recently graduated with a BA in Economics from the University of North Carolina- Chapel Hill and will pursue a MA in Applied Economics from American University. His present concentrations of study and research include international trade and macroeconomic policy, along with their effects on global welfare, economies, and the environment. After finishing his graduate education, he hopes to become a part of the U.S. policy making process through consulting and research.

In the decade following 2007, the Correa administration implemented the ECU-911 camera system for the purpose of reducing criminal activity. Unfortunately, the system became a political tool for intimidation and combating partisan dissent. Mario Pazmiño, a former Ecuadorian Army colonel, recalls being followed by Ecuadorian agents for his outspoken opposition towards the president’s policies and eventually being watched by cameras thereafter. He claims, “There is a direct collaboration between ECU-911, the Intelligence Secretariat and also those who surveil and persecute political or social actors.” Likewise, Martha Roldós – a staunch activist and former Ecuadorian representative – agrees, “The government viewed espionage as a toolbox, and they could use any tool they wanted. They could spy on your emails, your phone calls, they would set microphones on your vehicle. At the same time, you had people following you. It was a whole system.”

Seeing this type of behaviour in a self-declared democratic country should obviously appear concerning. One of the main principles of a constitutional democracy retains individual liberties, especially those of privacy and speech. In this instance, the Ecuadorian administration obviously contradicts these democratically defined human rights. Fortunately, President Lenín Moreno ensures the cessation of the ECU-911’s abuse and the investigation of its illegal politicization. Even so, its existence remains concerning, especially when paired with the history of its original manufacturer.

As lately documented, the Chinese government- under President Xi Jinping- instituted an observation system themselves, which resulted in the internment of thousands of Uighur community members. In this case, China directly targeted and repressed an entire minority group for the purpose of conversion and indoctrination. Though not an entirely democratic system itself, the nation still prescribes to the universally accepted statement of human rights organized by the United Nations. Thus, this overt contradiction of this value system reveals troubling conduct. Concurrently, the administration supplies 18 other national governments with similar groundwork for these actions. The Xi administration also provides these federal clients and 18 others with training for “public opinion guidance,” essentially political coercion and media distortion of the news.

Consequently, this situation clearly shows the immeasurable extent of influence China holds in the policing and surveillance systems both domestically and internationally. This form of Orwellian governance could quite easily transfer across national boundaries, especially in those countries susceptible to civil instability. Even further, this evidence becomes even more worrying considering its technical manufacturer – Huawei. Aside from China’s domestic usage of surveillance systems, the corporation defends itself from allegations of spying, intellectual copyright infringement and fraud. Thus, the global audience at large must remain skeptical of these commercial transactions and their potential effects.

Over the past decade, the world’s political economy witnessed election influence, the mishandling of personal data, social media’s unfortunate misuse and so on. More formal international laws regarding artificial intelligence and the Internet must be established. As the world economy and society becomes more digitized, this new technological environment requires new legislation prohibiting the encroachment on basic human and political rights.