Last Monday, Rio de Janeiro police officers greeted arriving tourists at the airport with a “Welcome to Hell” sign. Brazil has been dealing with its fair share of problems lately, from the Zika virus and the impeachment of President Dilma Rousseff, to a major recession and the preparation for the Olympic Games this August. City police have not been paid in a while, leading to a shortage of all kinds of supplies including basics such as paper for incident reports and car fuel. This protest by off-duty officers comes only weeks after an Australian athlete was mugged at gunpoint close to her hotel. Since other Olympians also experienced similar robberies during their testing and training in the city, Rio organizers were asked to mobilise security forces sooner. Obviously, the demand was not met since police made it clear that they were unsuited to protect the city unless they could acquire the necessary funds from the government.

In the lead up to the Olympic Games, police, residents, tourists and athletes alike are concerned for their safety in Rio. Brazil has one of the highest homicide rates in the world, with those living in marginalized areas affected the most. Japan Times reports that murder rates in the first quarter of 2016 are up fifteen percent from what they were during the first quarter of last year. With the police force demonstrations and street violence from favelas on the rise, Rio is struggling to attract tourists for the Olympic Games. CNN, in accordance with Amnesty International and Brazil’s Public Security Institute, announced that police officers killed forty people in May 2016 alone, which is more than double of the police killings during May of last year. This is not surprising, however, since when Brazil hosted the World Cup back in 2014, police in Rio killed 580 people, which was a 40% increase from the previous year. It seems to be a trend in Rio for police to increase executions, of mostly poor, black males from favelas, around the time in which Brazil will be the center of the world’s attention.

The government has stated it will distribute the officers’ promised paychecks this week, and hopefully it will be enough to reestablish some sense of security in Rio for the time being. In order to reach a long term result, more effective and sustainable action will have to be employed to curb street violence. Sustainable peace will only come through the targeting of poor communities such as favelas for development strategies, which include investing in education and job opportunities. These poor, young black males who make up the majority of offenders, result to gangs, crime and violence as a means of survival and due to lack of opportunity in their community. By throwing money at the problem, the government can create a police force to combat these gangs and street offenders, but it will not resolve the problem of violence in the long run. These funds could be allocated towards more effective and productive means of combating poverty and violence, such as education, infrastructure and the economy. As for now, Brazil has a lot on its plate that needs to be addressed in order to regain stability, which is essential in the formula for lasting peace. 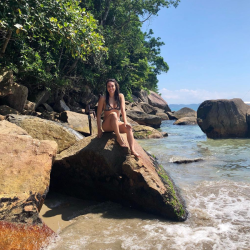