On the 5th  of August, 5 years after the civil war began, South Sudanese rivals President Kiir and rebel leader Riek Machar have finally struck a peace deal. The South Sudanese Civil War has killed more than 50 000 people and displaced four million since 2013. Half of these individuals have fled South Sudan but the remaining two million are internally displaced, putting them at extreme risk if war were to continue. The current peace deal calls for an immediate ceasefire and the implementation of a Unity Government within 3 months. The negotiations included promoting Mr Machar back into the Government, taking the role of the 1st of 5 Deputies.

“The agreement we have just signed today must map the end of conflict and war in our country” said President Kiir shortly after signing the deal. Kenyan President Uhuru Kenyatta, who was present at the signing, congratulated both South Sudanese parties on a decision which would alter relations in the region “I commend all of you for concluding the discussion on the critical issue of security and governance”.  Sudan also supported the peace negotiations by announcing that on September 1 it would recommence oil trade with the nation, to help in rebuilding the failed economy. Whilst Riek Machar supports the peace deals he warns that implementation is crucial to the success of the Unity Government. “Somebody said that the devil sometimes is embedded in the implementation” Machar spoke in his address to the media. He called on the Intergovernmental Authority on Development (IGAD) to ensure that the deal is fully executed.

Constant violations of peace negotiations, through unclaimed gun fire, have become symbolic of the South Sudanese Civil War. Nicolas Haysom, the UN envoy to South Sudan said that “by signing this agreement the guns must keep silent.” Whilst earlier peace negotiations have been disregarded within days, of signing this deal has the external supports to ensure its success. The IGAD have fostered these deliberations along with assistance from neighbouring countries and the United Nations. These organisations will provide guidance and support as the country transitions out of the civil war. Through communication with the press it is clear that both parties see the value of ceasefire. Both President Kiir and Machar have acknowledged that extension of the war will only contribute to further civilian causalities and losses to the already decimated economy. This demonstrates, for the first time, a genuine commitment to end the war.

The South Sudanese Civil War began in 2013, just 2 years after announcing independence from Sudan. Riek Machar, who was President Kiir’s Deputy, was accused of plotting a coup and saw him branch from the governing Sudan People’s Liberation Movement (SPLM). Machar formed the Sudan People’s Liberation Movement-in-Opposition or SPLM-IO. The formation of the rebel group marked the beginnings of a civil war, in attempt to destabilise the current government. The war not only saw attacks on enemy targets, but on civilian lives and their livelihoods. South Sudan was declared a ‘state of emergency’ which allowed the Government to suspend the rights and freedoms that its citizens expected from their newly formed country. Deaths, sexual abuse and the unavailability of resources were commonplace throughout the civil war. Today, resource shortages are extreme with thousands of people dying due to preventable illness, as medications become scarce. This is particularly concerning as new 2018 figures show that more than half of the country is now reliant on aid. Much of the required aid cannot be delivered as organisations, in the interest of safety, pull out of villages as they become active war zones.

The August peace agreement represents a turning point in South Sudanese history. This deal has the potential to drastically improve the wellbeing of the country as a whole, but also better the lives of civilians caught in crossfire. With international resources and trade deals readied to assist in South Sudan’s post-war transition, there is no reason why this peace deal could not succeed. As Machar said after signing the peace deal “there is no option but peace” and for a country so devastated by this war, this is crucial. 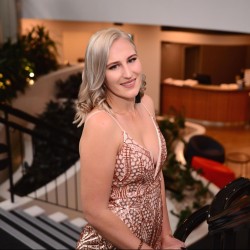 Ashlee is a Masters of Public Health Student at Macquarie University in Sydney, Australia, interested in innovative ways to improve the wellbeing of the world!